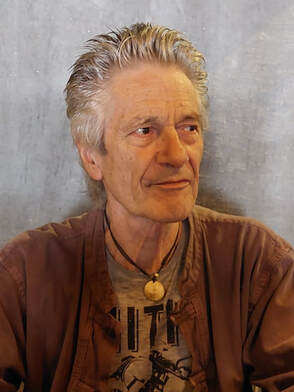 Christopher Castle is a British-born visual artist. Starting in Europe, as a leading member of the Earth Mysteries artists’ group in the late 1960's and 1970's, Castle explored landscape traditions, studying ancient and sacred sites, their forms and mythology, unearthing their meaning through his art. Moving to California in 1985, his painting and printmaking focused on native American sites and human relationship to nature, opening a psycho-spiritual view of the sense of place.

Castle travels widely, most recently to an artists' residency in Romania where with his wife, Yana, he has been studying the prehistoric Cucuteni culture, Byzantine iconography, folk art and traditions, the landscape and rural land use. In 2019 he exhibited his work on Cucuteni material at the Historical Museum at the Palace of Culture in Iasi, Moldavia.

Castle exhibits widely in the U.S. and Europe. His work is represented in many public collections such as the Metropolitan Museum, the British Museum, the Ashmolean Museum,  the Scottish and Welsh National Museums, the BBC and private collections worldwide.

Due to the current restrictions on travel Christopher and Yana have spent 2020-2021 in Sonoma, California.  Otherwise they have been dividing their time between California, Romania and Kathmandu, Nepal, where Christopher has been building a body of work from his studies of the the geomancy of the ancient temples and arts.

Printmaking is the principal medium for his recent expressions. He is a master etcher and most recently has combined his printmaking and painting experience in making several series of monotype prints.

Through his work he enjoys communicating his ideas and perceptions of sacred places, the landscape and the potent underlying shamanic vision they display. The implications of this geomantic vision are powerfully transformative, opening new aspects of contemporary culture and environmental awareness.