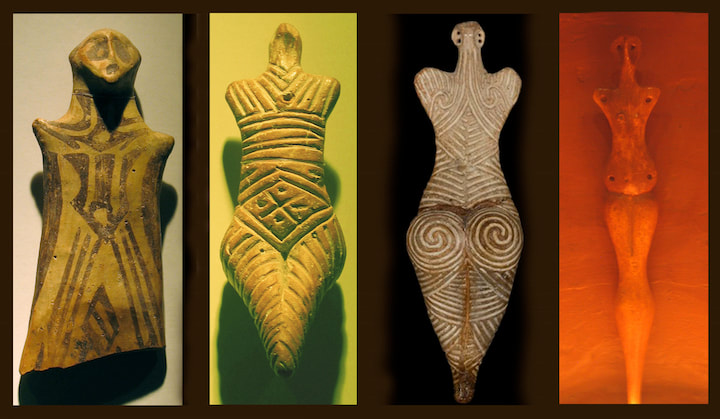 The Cucuteni Figurines
a perceptual adventure

There are thousands of clay figurine sculptures found in the archaeological explorations of Northeastern Romania. There has been much speculation as to their interpretation. Here is my own story with these powerful images.

My travels and research for my visual work have brought me in contact with numerous examples of “icons” from other cultures especially the Neolithic cultures of Europe but also extending to the Americas and Asia.

First inklings of a lost cosmology
I began my work in Britain and Ireland. Ancient stone structures from 5000 to 1800 BCE are widespread and include groups of standing stones carefully laid out in geometrically precise arrangements that express a cosmology based on astronomical observation, sacred enclosures, temples where the Earth’s cycles of life are observed and honored. There was a sophistication that the rough stones conceal and a knowledge based on harmoniously relating to the subtle earth energies that may still be experienced. Overwhelmingly the most common form that emerges from a broad survey of these sites is the circle. Understood universally as the symbol of unity the circle appears in many contexts. Not just stone circles but in the artifacts that are found in connection to the sites. The roundness of a pottery vessel combines practicality with a link to the same sense of unity. The rounded form of so many of the figurines that appear from so many sites expresses the same - a sense of the cycle of life, the circle of the horizon, the dome of the sky, the seasons. Roundness is the pregnant mother, the full belly, the form that integrates all aspects of life from conception to birth through life to death and dissolution and rebirth.

[This idea has not escaped the interpretation of archaeologists of course but too often a potentially powerful image is reduced to a simplistic explanation, dismissing` the figurines as “fertility goddesses” and the sites as “ritual enclosures.”]

Realization of the feminine in antiquity
Little by little over several years the notion established itself in my own conception of life. I began, with the help of several key feministically oriented women friends, to understand the essential importance and profundity of the idea not just for the interpretation of former cultures but for the understanding of our contemporary world and aspects of the dynamic balance of male and female that have been severely ignored, and ignored to our detriment. I began to see the imbalances we have created were not always present. This came home to me with profound implications for all times, not just the past.

Journeys to Malta to experience the Megalithic temples opened this vision dramatically. The very temple sites in their plans depict a female body. I saw the sites from Britain in a new light. Suddenly the roundness of the mounds and circles were also goddess images, if abstracted to their purest form of roundness. The sculptural images of ‘goddesses’ in Malta demonstrate the importance of the culture’s sense of fecundity. There was an honoring of the natural cycles and the integration of The Mother in this imagery. I went on to make several etchings following the opening of this door. As I became more familiar with them the symbols became living energies. I would contemplate these elements in the creation of the works.


Meeting Gimbutas
Continuing this line of inquiry I have become familiar with its transformative power and have sought out further dimensions of its meaning by studying other cultures. The most recent phase of this has been my work on the Cucuteni culture in Romania. I first heard about the Cucuteni from Marija Gimbutas who I was fortunate to meet on many occasions in the 1990’s. I learned much from her broad and perceptive vision of the “Goddess Cultures” of Eastern Europe including the Cucuteni. Archaeologists have attributed thousands of figurines to these Chalcolithic (Copper Age) people.

As I spent time with these images and visited their sites a whole other dimension of their interpretation opened up for me. What came through via the markings on both their sculptures and their painted pottery was a range of energetic qualities. The marks express and perhaps invoke energetic fields through their linear flow, and vibratory patterning. Being in the presence of such art creates an aura that I have suggested heals. Making whole again perhaps could mean a kind of spiritual integration or even a physical one. I have written a paper proposing this aspect of healing through the feminine, in particular focusing on a specific Cucuteni figurine from Raucesti in Moldavia. It is available on this website here.


My process with the ancient images
What interests me in particular is the consciousness that the images induce. The need for a pure, innocent yet rigorous approach is crucial to actually perceiving their deeper meaning and summoning up something relevant to my own creativity. My own practice with regard to this has been contemplative, meditative even, as I focus attention on seeing and feeling the energetic values embodied in the forms. Form is the visual language of art and familiarity with its principles can give insight to visual experience. Straight, linear, curved, expanding and contracting, color, the play of light and shade, defined or blurred, detailed or broadly spelled out, textured or smooth are some of the elements of visual perception. So, as an artist, the act of carefully looking with these perceptual modes takes one down to the essence of the material. Then, opening oneself to the response to the fact and immanence in one’s own awareness can bring one to a transcendent level. The immanence indeed implies a transcendence. Trusting these perceptions has helped in the next part of this process where I work with my own expression of the image. My painting and printmaking that has sprung from the rich Cucuteni material is an effort to make energetic contact with it and to peel away the preconceived layers that can obscure its significance.

I realized that the female figurines (there are few male ones) can be considered “icons” in the sense that they are images of the divine, sacred images that, though seemingly repetitive, have the power if we look closer to open our minds to a dogma-less experience of altered consciousness. The dark hollow eyes stare with cthonic depths reflecting those same unconscious depths in ourselves. By this contemplative approach an honoring of the feminine in nature comes about. These powers are indeed attributes of a goddess.