Cucuteni research in Romania
In 2010, following on from my long term concerns with the lost knowledge of ancient cultures, I began my researches into the culture of the Cucuteni in Romania. I was invited to attend an artists' residency in the village of Valeni in Neamt county, Moldavia, northeastern Romania.

The Cucuteni-Trypilia culture, which existed in the present-day southeastern European nations of Moldova, Romania and Ukraine during the Neolithic and Copper Age, from approximately 5500 to 2750 BCE, left behind thousands of settlement ruins containing a wealth of archaeological artefacts attesting to their cultural and technological characteristics.

My previous work on the Neolithic megalithic sites and art of Europe had led me to the work of archaeologist Marija Gimbutas.(*1) In her publications on "Old Europe" she had developed her ideas concerning a widespread culture in prehistoric times that was based on a cosmology of the feminine in nature and that expressed itself through the many thousands of artifacts that archaeologists have unearthed in Eastern Europe. Cucuteni sites (also named Tripolye in Ukraine) are ubiquitous in the Moldavian table lands and Valeni where I would stay happened to be in the heart of this region. Museums in the nearby cities, especially Piatra Neamt and Iasi, have fabulous collections of pottery and figurines. (*2) My days were spent in the landscape, the museums and in the studio.
See my article on my work with the figurines.

After several years of regular visits I have accumulated a body of work, paintings, prints and some writing, relating to the Cucuteni material. In 2014 I was invited by Magda Lazarovic to take part in the archaeological symposium, From Symbols to Signs at the Bukovina Museum in Suceava I gave a presentationentitled Entering Cucuteni Consciousness and exhibited my prints and drawings.Then in 2019, thanks to the support and friendship of some of the principal archaeologists, I exhibited in the National Museum at the magnificent Palace of Culture in Iasi. I was thrilled to be able to exhibit my prints and drawings in a gallery adjoining the museum’s comprehensive exhibit on the Cucuteni that was running concurrently.

The Museum published an accompanying booklet for my exhibition entitled From the Shadows to the Light.
See here 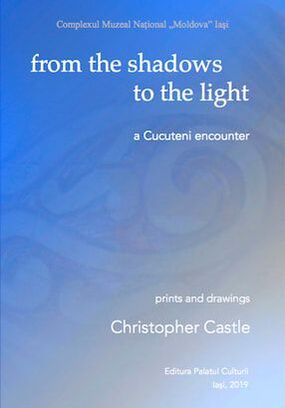 My creative adventure with the Cucuteni culture continues.
See here. (link under construction)

My heartfelt thanks go to Michael de Styrcea for his encouragement and support of this work.